The football off-season is certainly more relaxed, but most people don't realize how important it is to the success a team experiences during the season. The off-season mentality is an attitude that every person can adopt on their healthy living journey. Find out what I mean in this post on The Off-Season Mentality. 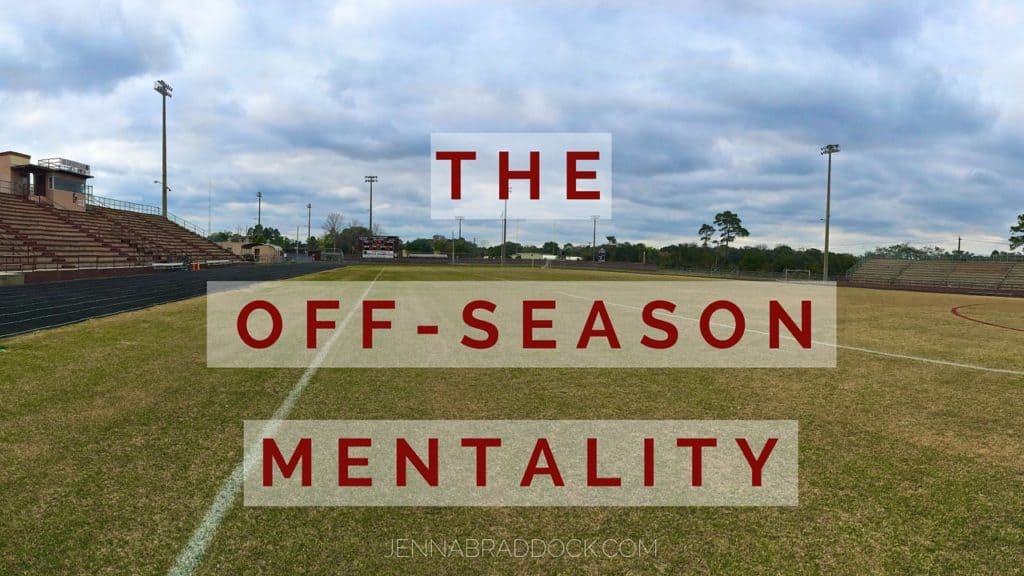 The #1 statement we hear from friends & family this time of year is:
"Must be nice to be in the off-season!"

It really depends on the year whether or not the off-season really feels "off". Since Coach took a new head coaching job last month (read all about it in my latest Married to Football post) our life has been in hyper speed.

I've heard Coach talk about the off-season many, many times. In fact, just 2 ago weeks he held his annual parent/player meeting where he addressed the importance of what happens this time of year.

Even though the off-season brings the end to Coach's 12 hour work days and football Fridays, it is anything but a vacation from football. In fact, I think we both would argue that the off-season is actually the MORE important time of year. So much work is accomplished to prepare to have a successful football season come fall.

Here's a run-down of what coaches and players are doing this time of year:

In all honesty, Coach (and I would certainly agree) would tell you that the next season begins the day after your last season ended. Immediately there was an endless list of things he needed to do to close out the last season and begin preparing for the next. Every day matters.

Once January hit, Coach moved on to helping players get recruited and hiring new coaches. Long phone conversations and after school meetings are the norm as he searches for schools that are a good fit for his players. One cool perk about this is that he gets to meet college coaches, like earlier this year when Mark Richt stopped by his former school. 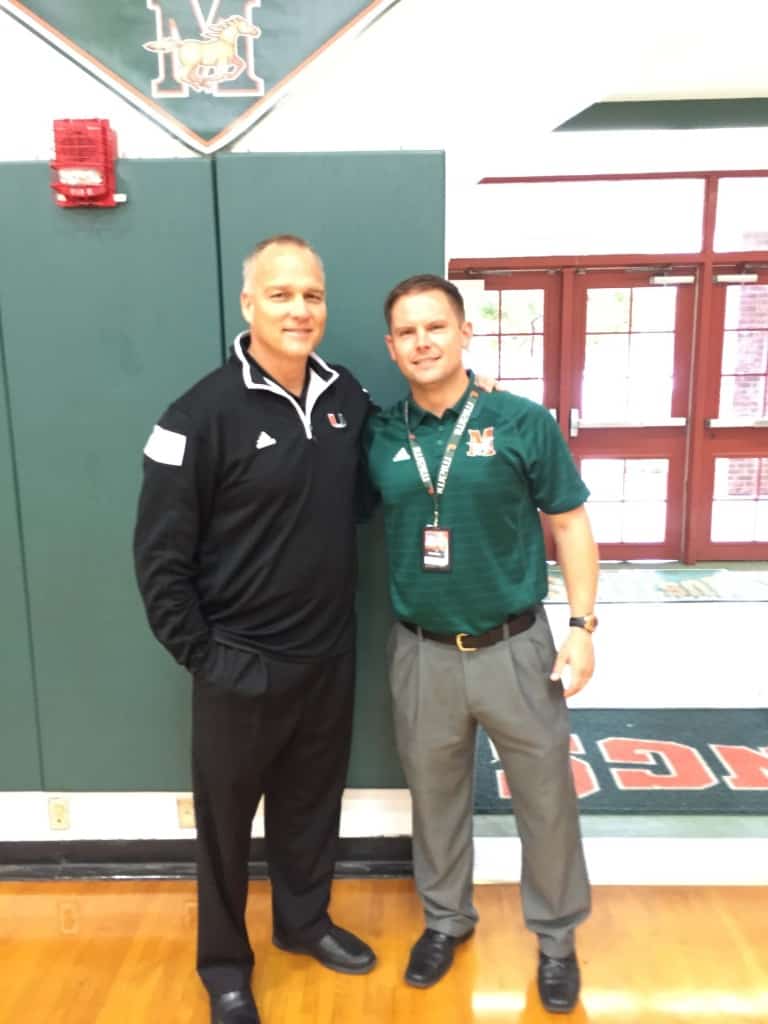 Coaches also take the off season to learn more about football by attending coaching clinics or sometimes visiting other staffs. Through the years, Coach has traveled to the University of Oklahoma, FSU and Florida to learn from their experience and knowledge.

Since Coach took a new job this year, this off-season has been crazy busy for him as he is meeting with coaches and players regularly, attending school events, and taking time to get to know people in the community. This is actually a very, very important aspect to the job for us as we want our program to be connected with the local community. We support each other and then everyone wins!  Here we are at the booster club fishing tournament this past weekend. So. Much. Fun. (For the record I WILL be an angler in the 2017 tourney.)

Coaches are also heavily involved in running after school workouts. The weight room is perhaps the most important place a player spends their time in the off-season and the coaches make sure they are doing the work, and doing it correctly. More on this below.

For the players themselves, they are investing time in the weight room, perfecting their skills and paying attention their nutrition. (Or at least this is what we hope they are doing.) Their main goals are to get stronger, faster, more powerful, and/or improve their body composition. For some, they are honing particular skills by attending combines and camps. And most importantly, we try to prepare the current juniors to start leading their team in the absence of the graduating seniors.

Not every player takes this time seriously, unfortunately. We know they think "what's missing this one workout really going to matter?" But what they don't always realize is that excellence is developed through a hundred small decisions, not one or two big ones.  Come the first day of practice in August (or the first day of spring practice), it becomes extremely clear who took advantage of every opportunity to improve.

Besides giving you a glimpse of our football life, I have a point by sharing all this with you.

I've realized that the off-season mentality has a many parallels to all of our lives as we pursue healthy living.

A lot of people approach healthy living and making changes like they are in football season. It's all about intense sacrifice and hard work RIGHT NOW so we win this week with a big weight loss pay off. That's great and all, but at some point, the "season" ends and so does the focused mindset and intensity that comes with it. Then what?

I want to encourage you to approach your healthy living more like the off-season. No day looks necessarily extraordinary in the choices you make. There weren't days of "two-a-day" super workouts or extreme dieting techniques that leave you drained and exhausted. You just know and embrace the small, daily things that must be done to be who you want to be like eating breakfast, having a salad, getting 30 minutes of exercise, passing on the large french fries, taking a walk instead of eating to reduce stress, getting a good night of sleep, taking time to mentally recover...whatever it might be. None of these are glamorous weight loss secrets that will land me, or you, a million dollar book deal.

But after 6 months, when you look back, you realized you've accomplished a LOT of work and made seriously progress.

Every day matters as do the little, every day decisions you make. It's not about huge, dramatic changes (most of the time).

You'll also find you are better prepared for the stresses of life that WILL happen. When these hard times hit (stress, travel, sickness, change of schedule, injury, etc) that really test your healthy living choices, you will move through that season with much more ease! Why? Because you took the off-season seriously and you practiced daily, healthy habits.

So if you ever hear someone say to an athlete, 'you've had a great off-season', you now know that's a huge compliment! They put in the hard work and showed up a better athlete at the start of the season.

I encourage you to adopt the off-season mentality where small, daily decisions matter, are important and will ultimately lead you on a journey to better health.

To being an "off-season" athlete,

Hi, I'm Jenna! I'm Jenna Braddock, the dietitian & trainer behind Make Healthy Easy. I believe that healthy living should be doable, accessible and affordable for everyone & that's just what you'll find here. I want to help you live a more vibrant life so you can use your health to love others well.